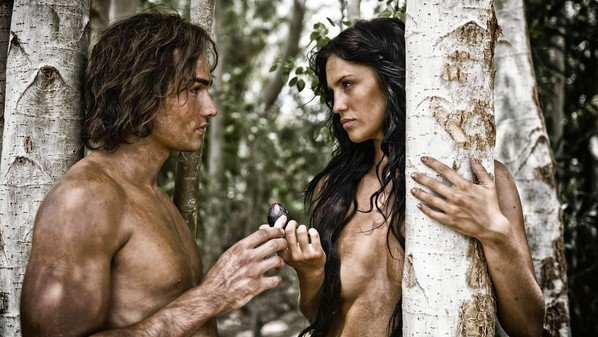 I watched the first episode of the Bible series on History channel last night and I thought it was really good. Yes, there were HUGE jumps from the near sacrifice of Isaac to the Exodus. Yes, they left out Joseph (and his coat of many colors) but I wasn’t that disturbed.  This is a movie and like any movie based on a book, they are gonna leave out something – probably one of your favorite parts.  With only about an hour and 45 minutes (not two hours cuz of commercials), they have to move quickly if they want to get to revelation by the end of the 5th and final episode.
I’ve seen a couple of complaints this morning about the ninja angels getting Lot and his family out of Sodom. I have two things that come to mind. First, the Bible says:

When Lot still hesitated, the angels seized his hand and the hands of his wife and two daughters and rushed them to safety outside the city, for the Lord was merciful. Genesis 19:16

Well how would you think that looked?  If you’ve got gangs of men roaming around who want to beat up and molest the angels, how do you think they got out?  Secondly, this is television in 2013 and Charleton Heston is nowhere in sight.  If they had calmly walked out, it wouldn’t have been very interesting or dramatic.  Our entertainment these days has dramatic fighting and action and to do any less would have been boring for us in the 21st century and certainly boring for the unsaved and unchurched who watch stuff like that.
For those familiar with the stories, use the series as a launching pad to delve deeper into the scriptures. Read the parts not mentioned. Read about Jacob and Leah and Rachel. Read about Joseph and why he brought his family out of Canaan and into Egypt. And stop nitpicking.

Romans 5:12-21 (MSG) Paul’s thoughts on the contrast between Jesus and Adam

12-14 You know the story of how Adam landed us in the dilemma we’re in—first sin, then death, and no one exempt from either sin or death. That sin disturbed relations with God in everything and everyone, but the extent of the disturbance was not clear until God spelled it out in detail to Moses. So death, this huge abyss separating us from God, dominated the landscape from Adam to Moses. Even those who didn’t sin precisely as Adam did by disobeying a specific command of God still had to experience this termination of life, this separation from God. But Adam, who got us into this, also points ahead to the One who will get us out of it. Yet the rescuing gift is not exactly parallel to the death-dealing sin. If one man’s sin put crowds of people at the dead-end abyss of separation from God, just think what God’s gift poured through one man, Jesus Christ, will do! There’s no comparison between that death-dealing sin and this generous, life-giving gift. The verdict on that one sin was the death sentence; the verdict on the many sins that followed was this wonderful life sentence. If death got the upper hand through one man’s wrongdoing, can you imagine the breathtaking recovery life makes, sovereign life, in those who grasp with both hands this wildly extravagant life-gift, this grand setting-everything-right, that the one man Jesus Christ provides? 18-19 Here it is in a nutshell: Just as one person did it wrong and got us in all this trouble with sin and death, another person did it right and got us out of it. But more than just getting us out of trouble, he got us into life! One man said no to God and put many people in the wrong; one man said yes to God and put many in the right. 20-21 All that passing laws against sin did was produce more lawbreakers. But sin didn’t  and doesn’t  have a chance in competition with the aggressive forgiveness we call grace. When it’s sin versus grace, grace wins hands down. All sin can do is threaten us with death, and that’s the end of it. Grace, because God is putting everything together again through the Messiah, invites us into life—a life that goes on and on and on, world without end.

A few weeks ago, my church did a series about the Tabernacle and how it was God’s way of drawing close to us.  Also too, we were given laws – many many laws – that we were to follow to be worthy to be in God’s presence.  The whole point was that there were so many laws, so many ways that we could not possibly make ourselves holy enough to be with God that sacrifices had to be made to cleanse the sins.  It was a great series because I’d never really understood why the blood sacrifices were necessary or why we didn’t still do sacrifices.

This passage makes me think of all the ways that God has tried to draw close to me.  It’s also reminding me that you can always turn around a wrong situation.  If God can do it for mankind, then I can do it with whatever is bogging me down.

Thank you Father for making a way.  Thank you for giving us your Son to cleanse the sins so that we might be close to you again.
We may earn money or products from the companies mentioned or linked to in this post.