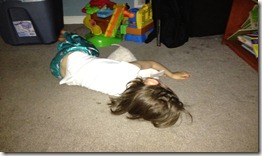 There’s something about your 16 month old baby having a 104.7 fever that gets you moving.

Wednesday morning, I knew something wasn’t quite right with Griffin.  He was alternately ok and whiny/clingy.  Would go play for a few minutes and then whining and wanting to be in my lap.  The closer we got to lunch time, he was less about playing and more about being on me.  Bad mommy was trying to get the newsletter for my MOMS Club finished and I finished it with him on my shoulder snoozing.

I said bad mommy because I didn’t realize how hot he was getting.  After I sent it out, I checked him out and yes, he was really hot.  I checked his temp and found he had a 102 degree temp.  In with the acetaminophen and he cooled down within a couple of hours.  I put him down for a nap and he awakened screaming a couple hours later with a temp of 104.7.  More acetaminophen and a call to the doctor’s office who, of course, had just closed for the day.

So as soon as John got home, he and I took off for one of the local children’s hospital immediate care centers. Which is 30 miles away.  But it’s the closest.  Sort of.  Actually there were two equally that close but that one seemed like the one that might have less traffic at 6 pm.

And I was right.

We got him there, the doc looked into his ears, said he had an icky ear and prescribed antibiotics and alternating acetaminophen and ibuprofen and sent us on our way in under an hour.  It took almost longer to get there and back than it took us to see a doc.

By the next day, he was back and forth between feeling ok and not but never spiked a fever above 100.  I felt like he was stable enough I could go to a meeting (I’ve been elected into my local MOMS Club as treasurer) and while he was up a bit overnight, he was much better Friday.

But not the girl.

She woke up, apparently ok.  She played in her room when she first woke up.  Then came requesting cereal.  I got up not feeling so good myself but dragged myself out of the bed and got her some cereal and me some coffee.

As the morning wore on, the girl was spending more time cuddled up in a chair or on the couch than playing.  I finally felt her forehead and she was burning up with a 102 degree fever.  Alright, battle plans in place.  Plenty of fluids, first acetaminophen and then ibuprofen.  I even made a handy dandy little on-the-fridge form that would help remember who had taken-what-when and laminated it.

And then my daughter puked.

What do you do?  Give more acetaminophen?  Withhold everything?  She seemed to feel better after throwing up so I consulted Dr Google which said to wait on another dose until time to give the next dosage.  I opted to give her the Motrin instead and she ate a little lunch and drank some water and genuinely seemed to feel a little better.

Then she took a nap on the floor covered in a blanket and woke up with a 106 degree fever.  John was home by now and we moved into action, bathing her with a damp washcloth in spite of her protests.  I didn’t think she really had a 106 fever but that it was skewed because she was sleeping under a quilt (made by my talented sister-in-law) and the fact that it’s 100 degrees outside and the air conditioning is just barely keeping up and in fact, the power went out for about 10 minutes and things got a little stuffy.

We got her cooled down to 102.7 within half an hour which confirmed my suspicions that it was partly overheating.  I was ready to throw her in the car and head for the emergency room but Daddy being more lucid, suggested a warm bath, so I threw her in the tub instead.

She felt much better and ate some dinner and went to bed late.

She just woke up a little while ago at 4AM and felt a little hot – I gave her Motrin and then sat down with her.

Me: I know.  I just gave you some medicine so you’ll feel better.

She: Mama, I need to go to the doctor.

Me: We might go if you keep feeling bad.  But right now, we’re gonna keep on giving you medicine. ok?

She looked pleadingly at me.

Me: Ok. We’ll take you tomorrow.

Then she got up, went upstairs and put herself back to bed.  I kissed her and told her to call me if she needed me.

She grabbed my hand.  “Tomahwo momma.  I need to go tomahwo.”

Do I take her?  I don’t know.  It depends on how she’s doing.  If Griffin is any indication, she’ll feel a little better Saturday morning and will be at 75-85% by Sunday.