Storms knock out all the utilities.  You are alone with a small child.  Would you be prepared? 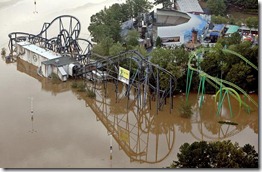 In September of 2009, I was at home alone with my then 15 month old daughter, Phoebe. The area had been having heavy rains for several days. During a storm a couple of days before, lightning struck nearby and fried our cable box, two telephones and my husband’s brand new iMac. Luckily, my cell phone would let me check the weather and emails.

Right after we dropped off my husband at MARTA that morning, the bottom fell out of the sky. If you experienced it, then you know what I’m talking about. The rain fell so hard I literally couldn’t see more than 10 feet from my front door. During the worst of the rainfall that day, my washing machine, which I had turned on just moments before, made a strange whining noise. I quickly realized that we didn’t have any water and I turned off the machine before there was any permanent damage. I used my cell phone to call the water company to find out what was happening and the power went off as I heard a recorded message telling me that the water system was overwhelmed by the rain and service was unavailable. So there I was, with a young child, no water, no power, and with no other way to communicate with the world besides a cell phone with a battery at 50% while a storm raged outside the likes of which I never hope to see again.

I was scared. But I thought quickly about my resources: what did I have? I had several cases of bottled water as well as a couple of gallons of water I had bought weeks before. I also decided to brave the rain and pull a large plastic trash can out into the deluge for water to flush the toilet. I may not have electricity or a way to find out what was going on, but, by golly, I was gonna get to go to the bathroom! We had peanut butter and bread so we were ok for food for a day or so. Luckily, the power came back on within a few hours and the water came back on the next day albeit with a boil water order.

The next few days are now marked as one of the largest and most expensive floods in history.

Our family was lucky and had a few things at hand. But this story also shows that the emergency doesn’t have to be a terrorist attack or a Zombie apocalypse for preparedness to be important.

Over the next few months, this space will feature some preparedness information for you and your family. I will be issuing challenges for you to complete. Completing one task a month will get you on your way. I will also challenge you to put together your own 72 hour kit. This kit contains everything you might need in the event of an emergency. You probably already have a lot of these items on hand but have no idea where they all are! So we’ll have our own little scavenger hunt to make it fun!

Our theme for this whole series is not to scare you, but to make you aware and more importantly PREPARED.

"Prepared, not scared" is my motto.

What have you learned from emergencies that you have incorporated into your daily life? Let me know in the comments!