A few days ago, I decided that I was starting to react to the autumnal pollen.  So I did what every reasonable person who is allergic to damn near everything did: I decided that was a good time to sweep the back porch covered in said polleny wonder.

Now I do have to admit that I was having some of MOMS Club friends over for a scrapbook session and the kids would be playing during this.  I knew that letting the kids run on the porch would be something they could do to run off some energy.  We were having nice weather and the kids loved the porch.

Next morning, which happened to be Wednesday, my voice sounded like I’d smoked about 4 packs of cigarettes before 10 am but I still felt ok.  Just a little tired.

By the next day, Thursday, however, I decided that I had seriously screwed up.  My nose was completely blocked and my throat was irritated and again with the raspy voice…

I needed to feel better fast.  Friday was going ot be action packed.  I had a purse party in the morning and John’s work was hosting their annual Halloween party for the kids.

Every year, this place has a seriously awesome party for the employee’s kids and this year, the employees were decorating all of the meeting rooms.  After hearing about the plans that John’s group had, I really wanted to see it.

I ended up missing the morning party much to my chagrin but at least my finances were happy.  I would have spent too much money as I LOVE purses.  But I needed to make an appearance at John’s party with the kids in costume. 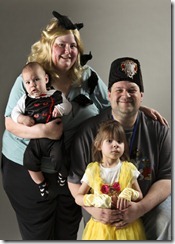 I had never dressed up before but always got Phoebe dressed up but then John didn’t usually dress up either. This year, he was dressing up and I didn’t want to be left out.

So we had a great time at the party and then we stopped at Varsity which has the best burger anywhere and the most fabulous chocolate milk in the world.

When we got home, I immediately went to bed but didn’t stay there.  I had developed a horrible cough and the only way I could sleep was sitting up.  Thank goodness for our recliner.  I slept there for a couple of nights before finally breaking down and going to the doc.

Sinus infection, ear infection and bronchitis.  YAY!  I am an overachiever.

That’s how we’re doing, how about you?