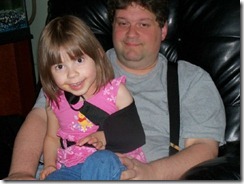 10 days ago, I found myself in the worst place a parent can imagine: the emergency room with an injured child.

It started earlier that evening.  I was cooking dinner, John was holding the baby and Phoebe was The Pink Tornado.  This is a term coined by one of John’s friends regarding her own preschool age child but it fits Phoebe so well that I’ve stolen it.

Like most three year olds, Phoebe is in perpetual motion.  She’s running here, scampering there, dancing around and jumping up and down.  She’s also moody and can be crying one moment and laughing the next.  She trips over her own feet and more often than not says “I’m ok!” before I can even ask.

She also has the annoying interesting habit of running off to hide when she’s upset or hurt.  Which is what she did after she flipped over a wheeled office chair I keep in the kitchen.  She hit the floor quite hard but I was mostly concerned with her noggin.  Not feeling any kind of knot on her head, I decided to let her finish processing the incident and let her hide behind a chair in the living room.

After about 10 minutes, she’s still crying and it’s not quite like anything I’ve heard from her before.  There was an urgency to it.  John finally got her out from behind the chair and I gave her what I thought was a pretty thorough inspection.  I checked her arms, her head, her back.. I saw no redness, no swelling, no bruising.

She stopped crying but there was definitely something wrong.  I thought maybe she’d bruised something that just hadn’t shown up yet.  I gave her some Tylenol and then she wanted up in my lap.  That’s when I figured out something was wrong with her arm.  I had looked at her arm; had bent the elbow, but didn’t see anything wrong and she didn’t react to me bending the elbow.  As I picked her up, I put my hands under her arms to lift her up and that’s when she screamed and I now understood what the crying meant.  She was in real pain and there was something going on beyond preschooler drama.  There was definitely something wrong but I wasn’t sure whether it was her arm, her shoulder or maybe even a broken rib.

I made the decision right there to take her to the emergency room.  Atlanta is blessed to have a great children’s hospital system that consists of three hospitals, numerous urgent care center, etc.  I took Phoebe to Children’s Healthcare of Atlanta at Hughes Spalding.

This hospital is near Grady Hospital in downtown Atlanta.  The location isn’t too great, but the parking lot is secure and brightly lit at 10:30 at night.  They validated my parking and we were in and out in just under two hours.

The nurse we worked with immediately saw the swelling on her chest.  I hadn’t seen it, wasn’t looking for it.  But it was there and turning red.  An x-ray showed that Phoebe had a broken collar bone.

Next day, an orthopedic explained to me that the collar bone, or clavicle, is the most broken bone in the human body and is very thin in children.  But she also told me that children are amazing healers.  Within a month, the bone will reconnect and within about 8-10 weeks, the healing will be mostly complete.  Additionally, in children this young, within about a year, the bone will actually remodel itself to return to it’s normal shape and it will be almost impossible to tell that it was ever broken.

So my daughter is part Time Lord.

Meanwhile, I’ve got to keep her from reinjuring it.  Remember she is the Pink Tornado.  So no jumping, no playgrounds, no climbing, no nothing that will keep it from mending properly.  Her grandparents overnighted a cool wooden “paper” doll set that she loves and is helping to keep her entertained.

back.  The orthopedic first put her in a standard arm sling with a waist strap to keep the arm immobile.  After our second visit, another practitioner suggested a shoulder immobilizing brace that is actually working a lot better.