C-sections are not exactly something that you think, “Gee, I hope my pregnancy ends in a c-section.”  You certainly don’t wake up in the morning WANTING a c-section.

But they aren’t bad things.

I didn’t know that I’d have a c-section with my first pregnancy – it just turned out that way because of a variety of reasons including: 1) baby was ginormous 2) I wasn’t dilated AT ALL 3) I was in severe pain from sciatica – so I had a c-section with Phoebe and it all worked out ok.

This time, I knew from the beginning that I’d have one because my practice doesn’t do VBACs (Vaginal births after c-sections) and I was ok with that.  I could have found another practice that would give me a chance to do one (a VBAC) but I felt comfortable with the idea and decided to stick with them.

For the most part, I am pleased with that decision.  However, that doesn’t mean that the c-section itself was in anyway pleasant. 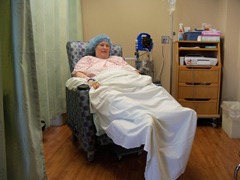 Thursday morning, we left the house at 8:30 and headed to the hospital.  Because of the gestational diabetes, they wanted me there a full hour before other folks usually have to be there so we wandered in about 9AM, got checked in, changed into our surgical gear and plugged into an IV.

The primary OB showed up about 11 and said we’d go at noon as planned.  We were just waiting for the second OB.  Turns out when you have a repeat c-section, they need two OBs to do the surgery.  I’ve yet to really find out why, but Moo has an idea it has to do with the procedure that I’ll tell you about in a minute…

So they walk me into the surgical theater at HIGH NOON and I sit on the table, get into position for my spinal block and then wait.  After about 10 minutes, the anesthesiologist is FINALLY ready to put in my block and then things started moving.

Again, how can I explain how a block feels?  I can only describe it as the feeling of when your hand or foot goes to sleep.  You are aware of pressure but there’s no pain and you can’t really tell whether someone’s poking you with a scalpel or tickling you.

I describe the c-section in two parts: before they get the baby out and after they get the baby out.  Last time, the first part was almost pleasant.  This time?  Not so much.  I immediately got nauseous from whatever they gave me and I felt like I was suffocating for most of the surgery.  I still smelled the odor of cooking bacon – which just happened to be my flesh burning. 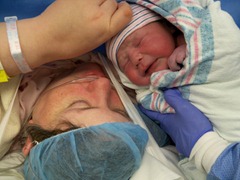 I still felt intense pressure when they were getting him out.  But things seem to be MORE this time, more intense, more pressure.  Moo says that when they were getting the baby out, that both doctors were standing on little footstools pressing on my stomach with both hands.  This probably explains why I felt like I’d been in a car wreck the next day. 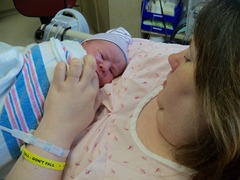 But there’s also the sweetness of the day.  The feeling of Moo’s hand in mine as they brought my child into this world.  The sound of his cries as he emerged.  The excited exclamations of the team at how beautiful this boy was.  The tears coursing down my face when they told me he was a boy.  The softness of his skin when they let me kiss his sweet little cheek before whisking him off to recovery.

So while I didn’t enjoy the process, I certainly appreciate the outcome.

One thought on “For the love of C-Sections”