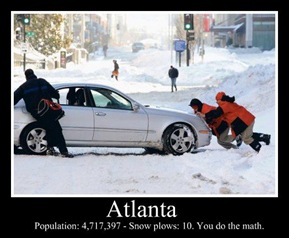 Picture it: Winter. Snow and ice in almost unseen amounts hits Atlanta. The interstates are shut down. People are stuck in their homes. I PERSONALLY missed 5 days of work.

Think that sounds like the current conditions in Atlanta? No. I’m describing what was called the Storm of the Century in 1993. Here in Atlanta, we commonly refer to it as the Blizzard of ‘93. 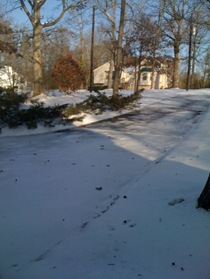 My front yard is currently covered in about 5 inches of snow with about 1 to 1-1/2 inches of ice on top of that. The street in front is covered in the same ice. I’ve seen a couple of cars (usually 4X4’s) go by but we haven’t ventured out.

Additionally, temperatures haven’t risen above freezing since Sunday. So you add 6 or more inches of frozen precipitation with 5 days of below freezing temperatures and you have a mess.

Atlanta and metro area counties are being criticized for their preparation or lack thereof and are promising to be better prepared the next time.

Our own storm preparations have been quite successful. Moo’s been working from home as we’ve kept electricity and, more importantly, internet service throughout week. I went to the grocery store on Saturday and got our normal groceries along with an additional loaf of bread. I also roasted a turkey Saturday morning.

In addition to the turkey, I do one batch cooking session every week and this week was lasagna. Our recipe makes 4 good size lasagnas and we put the extras in the freezer. So far, we’ve enjoyed the fruits of previous sessions in the form of turkey enchiladas, chicken tacos, veggie beef soup, homemade cinnamon rolls, and the lasagna made this weekend.

Here’s the important part of this: an event like this or even close to this only happens in Atlanta every 10 to 20 years!! Before the storm of ‘93, there was the storm of ‘73 which also had people housebound for several days.

I barely remember that storm as I was only 2-1/2 at the time – the same age as my daughter now – but I recall my mother’s stories about us losing power and then regaining it a few hours later because our townhouse had a generator. My only real memories of that storm are because my grandmother, who lived a short distance away, came to stay with us after a few days because her power was out for nearly 3 weeks. She brought her little Toy Manchester dog with her and our cat, Muffin, hated that dog and would spit and yowl at it.

Also in my memory is the big storm of ‘82 when the storms hit late in the day. My father got off work at 3:30 and ended up finally home at 8PM after walking the last 7 miles home after the car got stuck.

My memories and experience is limited to the 40 years I’ve been on this Earth but I can tell you this – spending tons of money on snow plows and salt trucks as some have called for in the last couple of days seems a little like overkill in light of the fact that this kind of thing only happens every 10-20 years. This is one of those times when you need to prepare yourself and your family.

Figure out what you and your family would need if you couldn’t get out for a few days and start that way. You don’t have to spend a ton of cash or time on preparedness. A few frozen pizzas and chicken pot pies in the freezer and some firewood is all most folks need.

So folks, the moral of this story is this: we got through those other storms and we’ll get through this one.

Relax and try to enjoy it.