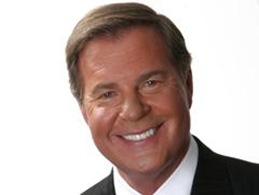 This is Glenn Burns.  He has been on the air as a meteorologist here in Atlanta since 1981 on WSB-TV.
Mr Burns has been on air during some of Atlanta’s worst weather in my memory everything from heat waves in the 1980’s and the blizzard of ‘93.
For the most part, I like him.  His style is informative and educational without being patronizing.  However, the more dire the weather prediction, the more giddy he gets.  This giddiness led my mother to call him “The Happy Bastard”.
During normal weather, my mother would say, “Let’s check the weather.”  During times of extreme weather, she’d say “Let’s see what The Happy Bastard has to say.”
I cannot help but call him the Happy Bastard, especially on a day like today when he is all over the giant snowfall we received last night.
Atlanta is woefully unprepared for snow.  We only have 1-3 instances of frozen precipitation yearly, so we only have a handful of sand/salt trucks and snow plows.  I don’t know anyone who has snow tires or chains.
Besides, we don’t usually get much snow.  We generally get more ice in the form of sleet and freezing rain and NO ONE can drive on ice – not even Yankees.
The Happy Bastard has been predicting this mess since Friday and he’s been right this time.  So this morning, Moo stayed at home and is working.  My OB/GYN office called yesterday to let me know that the office would be closed so I’m not trying to get to a doctor’s appointment.
So we’re home, safe and warm.  Comfy and cozy.  And the Happy Bastard is predicting more precipitation for later this week.