So I go a week ago Tuesday to get this frickin’ wart removed.

Having surgery requiring anesthesia is tricky business when you are pregnant.  For one thing, most of the anesthesia passes through the placenta and will dope up the kid too… this is not a good thing.

So I get to the hospital, get registered and get taken to pre-op to strip off and put on a hospital gown.  I made a point of telling everyone I ran into that I was pregnant so that if it was relevant to what they were doing, they would know.

Nurse Rita put in an IV and then used a handheld doppler to find the baby’s heartbeat.  Found it pretty quickly and the baby kicked her – Miss Rita thought that was fun.

Then the anesthesia came in to discuss options for anesthesia and agreed that a block was the best thing.  He originally wanted to do a spinal I think but my podiatrist suggested a block of just the leg from the knee down on.  When you get this, it’s called a popliteal sciatic block.  I was also given a little “get happy” juice in my IV to relax me while they placed the block.  It wasn’t entirely unpleasant.  I do remember singing Chantilly Lace at one point – a song which neither my doctor nor my nurse knew until I started singing it. It’s supposed to take 20-30 minutes for the block to work fully at this point. 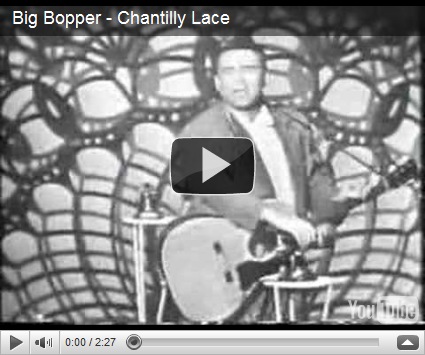 And then we were on our way to the OR… and the LASER.  I cannot help but say laser like Dr Evil in the Austin Powers movies so please think it that way as you read.

Anyway, we get in there, I get set-up the rest of the way and then the podiatrist realizes that I am not fully numb when he attempts to put a little local anesthesia in to finish off the needed numbing.  IT HURT LIKE HELL!!  I finally said some very bad things and they gave me a little pain meds in the IV to assist.

Y’all they gave my Propanol.  YES THAT PROPANOL.  The drug that basically killed Michael Jackson.

And then I wondered why he would ever want to use it.  When it would go into the IV in my hand, my hand would start hurting very badly – at one point, I asked if my hand was falling off because HOLY MOLY it hurt that bad.

Did you know that if you have laser surgery, that everyone in the room, including the patient, has to wear protective eye wear?  Yeah, we were all sporting what looked like Oakley sunglasses for the entire procedure.

So they finish up, wrap my foot in about 32 feet of gauze and roll me off to Recovery where the fun really started.

For one thing, it completely freaked them out that I was pregnant.  They kept asking me how far along and I kept tellin’ em 20 weeks and they kept saying they had to get fetal heart tones before I left. They also were freaked that I have gestational diabetes.  That would require a glucose check and they had to go find a monitor.

So they find the glucose monitor and my sugar is 116 – not too bad considering I’m stressed. (Yes, stress affects your glucose level) and then I get a cup of ice with my beloved cran-grape juice.  GAWD, I love that stuff!!

The really fun part comes when they try to get the fetal heart tones.  Baby is AWAKE AND MOVING at this point.  The little handheld doppler has to have 10 seconds to register the heartbeat and the little booger just kept moving and then they’d have to search again.  They weren’t used to doing fetal heart tones so by the time it was over, I was completely covered in the gel they use to make the doppler slide across your skin better.  And Nugget kept KICKING THEM!!!  At first, they were kinda freaking out, but then it became a game of “will the baby kick again and then move?”

We finally get heart tones (147) and blood pressure (134/82) and then I’m off to discharge to get my prescription for pain meds, instructions for care, the IV removed and I get to get my clothes back on and go home!

I was given a pain med (Perc*cet) before we left the hospital.  I forgot that if I take that stuff with an empty or nearly empty stomach that it makes me wickedly sick.  Ugh, I almost had to have Moo pull over so I could hang my head out the door like a dog.

We left the house at 9 that morning and got back at 3.  I was hoping to get back around 2 but everything with doctors and hospitals always seems to take longer than you think.

When we got home, I could not feel my foot or lower leg at all so it was fun to get into the house.  And then Moo and I thanked his sister who stayed with Phoebe (YOU ROCK SIS!!) and had some lunch and then I took a little nap.

The pain/feeling came back around 3 am.  I am thankful that I followed the doc’s instructions and took a pain pill before it came back.  Otherwise, it would have likely been a lot worse. 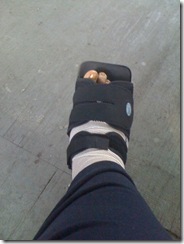 So for the last week, I’ve been wearing some lovely footwear, hobbling around the house (can’t drive because of my foot and the pain meds), but mostly I’ve been ok.  Strange what you can adapt to when you need to.

Moo has taken REALLY good care of me.  He has been cooking some, taking care of the house some and just being incredibly supportive.  He’s also helped me soak and wrap my foot twice a day.  He became a wrap expert with his toe last year so his expertise has been invaluable.

So I guess the moral of this story is: if you go to a public locker room, WEAR SOME FRICKEN SHOES, because warts are not fun.