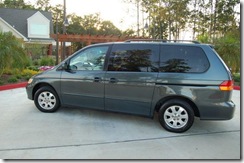 As mentioned previously, a couple of weeks ago, I took my 2003 Honda Odyssey to the dealership. I needed an oil change and I had an engine light on.

Now for a little back-story: Here in metro Atlanta, we have to have yearly emission tests because of the smog. Your car will NOT pass the inspection if your engine light is on.

Now enter the light itself. A few weeks ago, I was having trouble with one of the tires. I kept having to put air in it. One afternoon, the traction control light came on and stayed on and then the engine light came on. So I went over to the Sears where I bought the tire and they found a 6 inch spike in the sidewall. And of course, it was in exactly the spot that the tire could not be patched so I needed a new tire.

I take the car to the dealership and after about an hour the service manager comes over and sits down with me. The problem is NOT the traction control light. It’s a warning about the transmission and the news is not good. The fix for this is to replace the transmission (!!!) and the computer (!!!!!!!!) and the cost is in the thousands. Yes, THOUSANDS. As in SIX THOUSAND.

With the exception of this light, this vehicle drives like a dream. And my car is well loved. My mother bought it new in 2003 right before she got sick. We took it to Mississippi to gamble a couple of times and we all really loved how smooth it was over Alabama’s terrible roads. We also really loved how comfortable the captain’s chairs were.

When mom got sick and passed away, I inherited both of her cars: the aforementioned van and a 1998 Ford Escort I’d been driving since my own car was stolen from in front of our apartment complex. I immediately sold the Escort but kept the van.

I had told myself years ago that I would never, never, NEVER drive a mini-van. But then I drove this one and loved it. And I’ve loved it ever since I inherited it. I have driven to DisneyWorld in it several times; I brought my baby daughter home from the hospital in it. When Moo and I went crazy and sold his car a couple of years ago, we knew the van would take care of us.

So here we were. With a van that needed major repairs and no money to do it. I knew I’d never fully trust the van again. So we traded it in and bought a new vehicle.

I miss my van like crazy and I’m already plotting ways to get another one.