So I’ve been hiding from all of you.

Because of the shame I feel.

I noticed when I was pregnant that my feet REALLY hurt.  I even told the midwives about it.  They all agreed that pregnancy was torture on your feet and that was the end.

But I knew something else was going on.  I had these two … spots.  Spots that were flesh colored and didn’t particularly hurt except if I walked a lot.

They bothered me a little last Spring when we went to DisneyWorld, but for the most part, they haven’t bothered me.  Then around Christmas, my other foot started to really hurt and I had a large SPOT on that foot.  It REALLY hurt to walk on.  But I still procrastinated and finally ended up going to my podiatrist a couple of weeks ago.

Now as you know, the history of my feet are widely discussed on this blog.  Feet are near and dear to my heart.

I helped take care of my father’s feet when he had an injury.  He was a diabetic and had a really deep cut on his feet. That injury progressed until he finally had to have the foot amputated.  So I’ve seen some pretty gnarly feet and some pretty gross stuff having to do with feet.  For the most part, I am immune because come on, when you see someone with gangrene on their feet and you don’t puke, you pretty well have a strong stomach.

I was totally freaking out.

Anyway, the podiatrist, who is just adorable and is totally my type except I’m married and my husband would completely kill him, says: “we have a couple of different treatment options.  We can reserve an OR suite, put you out and zap these things with a laser or I can put this bug juice on your feet and then peel off the resulting blister in two weeks.  The bug juice fix will take a couple of treatments to completely get rid of the warts.”

Y’all, I chose the bug juice. 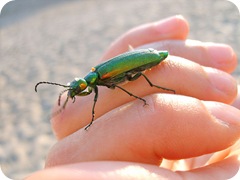 I thought, “How bad could it be?”  Man, sometimes I am stupid.

By the time we settled in and had dinner, my feet (YES, I had BOTH feet treated AT THE SAME TIME!) were killing me.  I had bandages on my feet that I was supposed to leave on for 24 hours so I couldn’t see what was going on but OMG they HURT!

So it’s a week later and 2 of the 3 areas are much better.  Were in fact better within 48 hours.  1 of the areas however was still killing me LAST NIGHT.

I go back next week to have the skin peeled off the blisters and another application of the bug juice.  YAY!